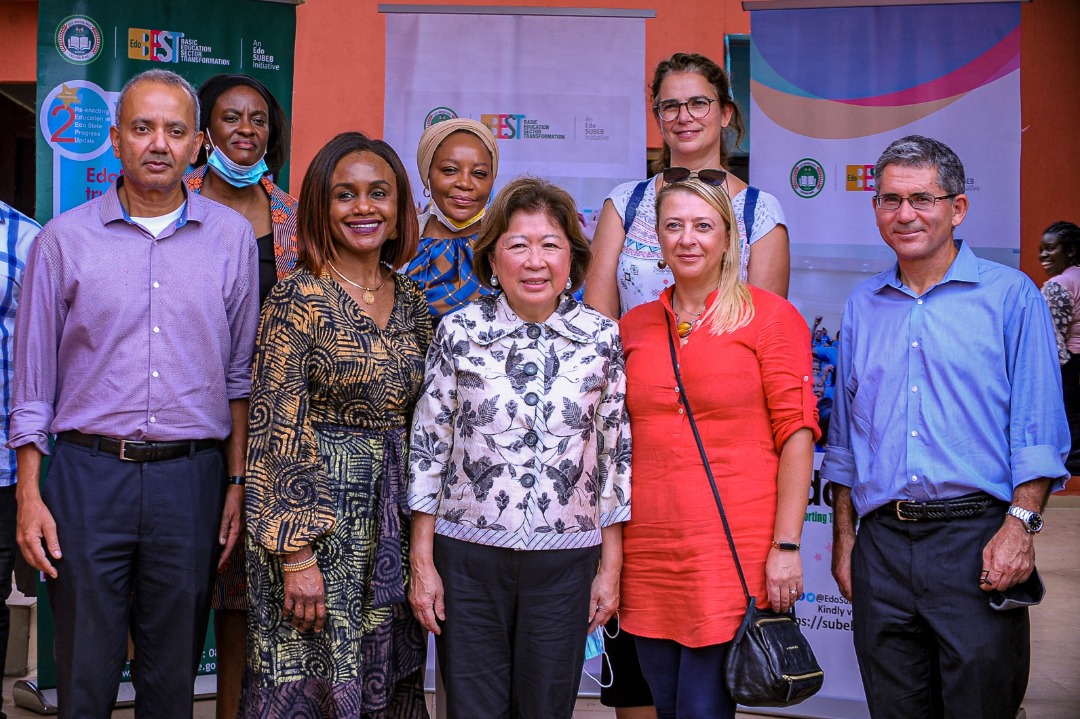 A delegation of the World Bank, led by Mari Pagestu its Managing Director of Development Policy and Partnership and its Nigeria Country Director, Shubham Chaudhuri has commended the progress made by the Edo State Government in improving basic education through EdoBEST.

The delegation, which was on a study visit to Family Support Primary School in Benin City, was received at the school by the Commissioner for Education, Dr. Joan Osa Oviawe and the Chairman of Edo State Universal Basic Education Board (Edo SUBEB), Mrs. Ozavize E. Salami.

During the visit, details of the EdoBEST pedagogy and its impact were explained by teachers, parents, School Based Management Committee (SBMC) members and pupils.

The World Bank team also had the opportunity to examine teachers’ tablets, books, character boards and other items used to facilitate the learning process.

Addressing the delegation, the Chairman of SUBEB, Mrs Ozavize E. Salami noted that the Edo SUBEB Board welcomes collaborations that could further deepen the gains of the EdoBEST programme and improve learning outcomes among pupils.

Teachers demonstrated how their teacher-computers (tablets) work and how they are used to record attendance, teach, mark scrips and record assessments.

Parents and pupils had the opportunity to explain how EdoBEST@Home, an initiative of EdoBEST that was introduced following the outbreak of Covid-19, contributed to improving learning outcomes, as many regions in the World lost out because of school lockdowns.

Edo State is the only sub-national beneficiary of the World Bank accelerator programme. The programme acknowledges a global cohort of countries or sub-national entities that demonstrate strong political and financial commitment to improved learning and are willing to measure and monitor learning outcomes. The countries and sub-nationals in the category have an investment plan to reduce Learning Poverty.

The Bank pledged $75 million support to the EdoBEST programme and its initiatives such as the EdoBEST@Home initiative.

Ms. Mari’s visit was concluded as her team, alongside pupils of Family Support Primary School, planted a tree to commemorate the visit.