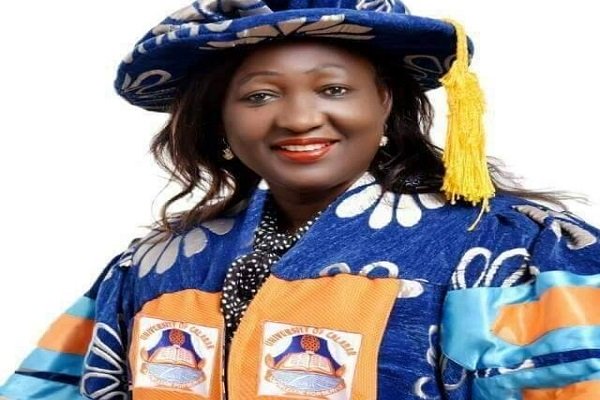 Prof. Florence Obi of the faculty of Education and one-time deputy Vice-Chancellor, Administration at the University of Calabar has emerged as the 11th Vice-Chancellor of the university.

She is also the first female to be so elected.

Chairman of the University Governing Council and the Pro-Chancellor, Senator Nkechi Nwaogu announced to newsmen on Friday that Prof. Obi emerged victorious over twelve others who were eminently qualified as well.

She noted that the governing council was guided by the guidelines for the screening of a vice-chancellor as provided by the federal ministry of education. She maintained the screening exercise was transparent, free and fair to all participants.

Senator Nwaogu said the persistence of Prof Obi may have paid off for her as she had contested for the same position in 2015 but lost.

She charged the new Vice-Chancellor on assumption of duty to look at the things done by the outgoing VC and be able to build upon them.

Responding to newsmen after getting her appointment letter from the governing council of the University, the VC-elect Prof. Florence Obi who is expected to assume work on the 1st December 2020, expressed gratitude to God for have success and pledged to run an inclusive administration.

Professor Florence Banku Obi is a mother of four and grandmother of six from Bansan – Osokom, Boki Local Government Area of Cross River State. With sheer grit and tenacity, she overcame all hurdles to sustain a successful academic voyage.

The journey began from St. Bridget Primary School, Ogep-Osokom in Boki Local Government Area of Cross River State, through St. Thomas’s Teacher Training College, Ogoja, Cross River State, to the University of Jos, Plateau State, and from Jordan Hill College, Glasgow-Scotland to the University of Calabar, where her academic pursuit finally landed her a PhD in Psychology of Education. Her foray into academia and her monumental ascension further illustrates a line in Isaac Watt’s poem that reads, “Little drops of water make a mighty ocean”.

She began her academic career as an Assistant Lecturer at the Institute of Education, University of Calabar in March 1990 (30 years ago). Two years after her appointment (1992), she won a 6-month postgraduate scholarship to Jordan-Hill College of Education, Glasgow, Scotland, under the World University Service (WUS), World-Wide Fund for Nature (WWF) and the Nigerian Conservation Foundation (NCF) in a keenly contested interview for staff of the Institute of Education.

On her return from the United Kingdom (UK), she was placed in charge of the WWF/NCF funded Schools and Community Education programmes. She subsequently facilitated the development of the degree programme in Environmental Education of the University, which had since resulted in the establishment of a full-fledged and flourishing Department of Environmental Education. Professor Obi rose through the ranks to become a Professor of Special Needs Education in 2007.