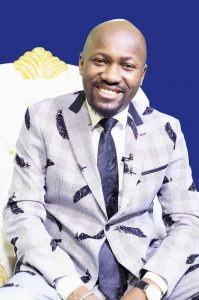 The social media have become awash with testimonies of likely fulfillment of the prophecies foretold on November 8th, 2019 by the President of Omega Fire Ministries Worldwide, Apostle Johnson Suleman, wherein he prophesied that there would be no more cabal in Nigeria come 2021. Among the many prophesies foretold for year 2020 and 2021, the fearless Apostle had said that Nigeria will be rid of the much talked about cabal which the wife of the current President, Aisha Buhari, had, last four years, accused of hijacking her husband’s government and being behind many of the presidential appointments in the country.

Many Nigerian also believe that the cabal, like the First Lady had revealed, has very strong influence over the government of Nigeria, specifically, the decisions from Asoro Villa.
Aisha Buhari, the wife of the President had, in an interview with BBC last four years, expressed her displeasure with the political scene in the country as at then, lamenting that her husband’s administration was being hijacked by the cabal.
Ever since, many policies and decisions from the government were believed by many as having the “imprimatur” of the cabal.
However, in the video clip of the November 8th, 2019 prophesy currently trending on social media, Apostle Suleman said God revealed to him that many members of the so-called cabal would not be alive in 2021.

According to him, “When I got back, I just sat down. And the Lord told me, He said son, I want to talk to you. Step out, step aside. I said to him, can you give me a minute. I stepped to a corner and He said take a pen. He said to me, concerning government, in 2021 there will be no cabal! Because, many people who are presently at the cabal won’t be alive.”
The prophesy resumed trending on social media following the recent death of Mallam Abba Kyari, the former Chief of Staff to the Nigerian President, Muhammadu Buhari, whom many claim was a member of the cabal. They however took to the social media to attest that many of the prophecies given by the Omega Fire Ministries president have and are still coming to pass. Recall, howevr, that Late Kyari died few days ago of Corona Virus infection.
Also, being a subject of discuss on social media is Apostle Suleman’s many other prophesies. Apostle Suleman had also prophesied, in his WORLD PROPHECIES FOR 2020, released in August 2019, that China would experience many loses. Number 27 of the prophecy had read thus: “China to experience major losses.”
Following the outbreak of the coronavirus in Wuhan in China, the Asian country’s stocks recorded their worst bearish day in years even as China’s currency also recorded a heavy fall. Also, Levi Strauss & Co., which in October 2019, opened its biggest Chinese store in the city of Wuhan, the center of the outbreak, was forced to close shop following the continued spread of the virus.
Also, in his prophecy number 29, Apostle Suleman urged the leader of North Korea, Kim Jong-un to pray against serious health challenge. Consequently, there has been a speculation that Kim Jong-un is seriously ill, after a Seoul-based website reported that the North Korean leader had undergone heart surgery.
Daily NK claimed in a report recently that Kim, who has not been seen in public for 10 days, was being treated at a private villa following the procedure this month.
CNN, meanwhile, cited an anonymous US official as saying that Washington was “monitoring intelligence” suggesting that Kim was in “grave danger.”
But Kang Min-seok, a spokesman at South Korea’s presidential Blue House, said there was “nothing to confirm rumours about Chairman Kim Jong-un’s health, and no special movement has been detected inside North Korea as of now.”
Apostle Suleman had also prophesied about the United Kingdom finally experiencing Brexit.
Below are other prophesies by Apostle Suleman:
1. Agricultural boom in Nigeria, greatest in history.
2. I saw more activists arrested
3. There will be series of earthquakes, tremors even in Nigeria
4. U.K experiences Brexit finally
5. A new pattern of letter explosion
6. I see ethnic clashes in Nigeria. Please let’s pray hard
7. Improved security situation in Nigeria
8. I see internal deportation in Nigeria
9. I saw NFF (Nigeria) receive international recognition
10. Liberia needs prayers, serious prayers (blood bath)
11. I saw cows killing herdsmen
12. The ruling party will fight the presidency
13. I saw the rise of many music stars
14. On the 24th of august 2019, I saw a revelation of many former governors jailed, but some were granted bail before completing their terms
15. Abuja residents should pray hard against killings
16. I saw a senator collapse in public but later resuscitated
17. Crises in NLC
18. Lagos NURTW to pray against their leaders being poisoned
19. Nigeria presidency to release Elzakzaky, I saw him being laid to rest and it caused unspeakable uproar. It can be avoided if he is released.
20. I saw something invented for cooking, plugged to electricity
21. A popular known young musician in Nigeria drugged by one of his boys and hospitalized, but survived
22. I see a new medical centre in Nigeria attracting inflow of foreigners into the country (Improved health system)
23. I saw something that looks like a referendum
24. I saw a country being split into two and there was mass protests
25. The Nigerian government should focus on fixing roads. Its urgent as this would address a major crises between Feb/March
26. I see federal cabinet ministers having crises and being indicted
27. China to experience many loses
28. I see mass killings in Iran
29. The leader of North Korea should pray against kidney infection
30. I saw Nigerians greatly honoured on international scene
31. I saw a great improvement in the IT industry
32. A great businessman taking political stage
33. I saw president Macron (France) fired some people in leadership
34. I saw the Nigerian film industry receive support from private investors.”