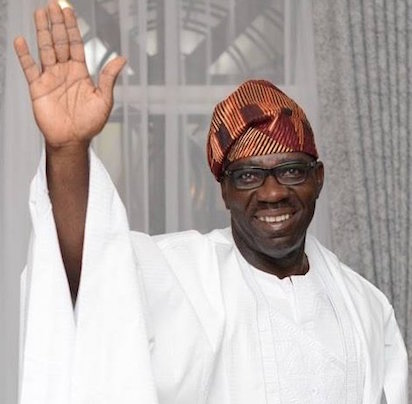 The Edo State Governor, Mr. Godwin Obaseki, has hailed Irenosen Okojie, an indigene of Edo State, for winning the 2020 AKO Caine Prize for African Writing with her short story, ‘Grace Jones’, from Nudibranch, a collection of short stories published by Dialogue Books (2019).

In a statement, the governor described the Nigerian-British author as “an enthralling storyteller and thinker, who serenades and inspires readers with her unique blend of magical realism, surrealism and Africanism, delivered in captivating, disarming prose.”

He said that Okojie, with the win, blazes another trail for Edo people, noting that she has made a mark as an enviable ambassador of the state.
“The feat is not only a call for celebration but an acknowledgement of the innate qualities and potential of Edo People,” he said.

According to Obaseki, “We warmly congratulate Irenosen Okojie, who has just been announced Winner of the 2020 AKO Caine Prize for African Writing, an annual literary award for the best original short story by an African writer, whether in Africa or elsewhere, but published in the English language.

“Irenosen Okojie’s ‘Grace Jones’ was pronounced the winning short story for its radicality of logic, extraordinary imagination and timely reflection of African consciousness.

“As the 21st winner of the prize, established in 2000, she has continued to distinguish herself, joining the league of other Edo sons and daughters in the Diaspora who are putting the state on the world map for good. We are proud of her exploits and are even more confident that she would bring more glory to our state and country.”

The governor however reassured that his administration will continue to pursue reforms and policies to ensure that the majority of Edo people realise their fullest potential.

As the winner of the prize, she goes home with the £ 10,000 cash prize while four other shortlistees, including two Nigerians, a Rwandan and a Tanzanian, receive £500 each.

Okojie is an accomplished writer whose books have won awards and received considerable critical attention. She came into the literary limelight in 2016 with her debut novel Butterly Fish, which won a Betty Trask Award and was shortlisted for an Edinburgh International First Book Award. Beyond her three published books, her work has appeared in notable platforms, including the New York Times, the Observer, the Guardian, the BBC and the Huffington Post.