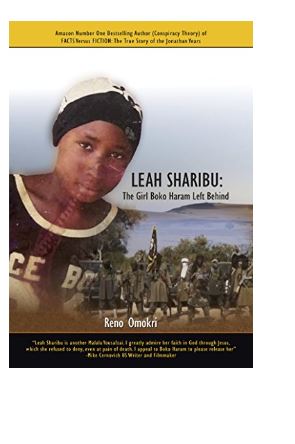 Three years after the abduction of Leah Sharibu by the notorious terrorist gang, Boko Haram, the number one bestselling author and former aide to ex-president Goodluck Jonathan, Pastor Reno Omokri has remained steadfast in seeking her release as he has toured many countries, soliciting help from world leaders to secure freedom for Leah Sharibu.

Also lending their voices in calling for the freedom of Leah Sharibu in a video by Pastor Omokri are prominent personalities across fields such as the Catholic Bishop of Sokoto Diocese, Bishop Mathew Hassan Kukah; former Governor of Anambra state and vice presidential candidate of the People’s Democratic Party, PDP, in the last general election, Mr. Peter Obi; former Governor of Cross River state and one time presidential candidate of Social Democratic Party, SDP, Donald Duke; Former Senators, Ben Murray-Bruce and Ali Ndume. Others are Nigerian professional footballer, Odion Ighalo; publisher of Ovation Magazine, Dele Momodu and popular singer, Onyeka Onwenu. Others are Lead singer, Shalama, Howard Hewitt among others.

In the video, Pastor Omokri and his friends called for the release of Leah Sharibu and also urged people to join the call for her freedom.

According to him, “It’s been three years since Leah Sharibu was abducted by Boko Haram on February 19th, 2018 and I have gone round the world, 35 countries to be exact, meeting world leaders and appealing for her release.

“Leah, if you are watching this, you haven’t been forgotten and I can’t wait for you to be released when I can give you this lovely Chocolate baar that I made for you.”

Also speaking in the video and calling for her release is the former governor of Cross River state and one time presidential candidate of the Social Democratic Party, SDP, Donald Duke. According to him, “it’s been three years since the notorious terrorist gang known as Boko Haram seized 110 young girls. Five died during the ordeal. The rest were released except for Leah Sharibu sho is purportedly being held for not renouncing her religious faith. It is bad enough that these hoodlums operated with a similar motive in 2014 but worse is repeated, the impunity of their actions with growing helplessness of Leah’s fate and seemingly nonchalance of the Nigerian authorities.

“What message are we sending to our children and the world at large? – that we are a nation of anything goes. I add my voice. If you dont think that out children deserve this fate, then Leah certainly does not! Let us all rise up and remind our government that they all swore a solemn oath to protect lives and property as enshrined in the constitution. We expect no less from them then and today.”

Speaking also, the former governor of Anambra state and vice presidential candidate of the PDP in the last general election, Peter Obi said “Leah, I am thinking about you. I am praying for you and by the grace of God and prayers of all the good people, you will be free one day. Free Leah Sharibu!,” He added.

In his own contribution, former Senator representing Borno South, Senator Ali Ndume said, “I am a Muslim but I join my friend Reno Omokri in praying for your freedom.”

Strikers in the sports world also joined their voices in calling for the release of Sharibu one of who is Nigerian professional footballer, Odion Ighalo. While calling for Leah’s freedom, Ighalo said, ” it’s been three years. I join my friend Reno Omokri to say, free Leah Sharibu.”

Meanwhile, during a #FreeLeahSharibu campaign held in Hollywood, California in November 2019, pastor Omokri, while responding to questions about what everybody should do to ensure Leah Sharibu’s release said people should go on social media and create the awareness for her release. He said, “go on social media, go on Twitter, go on Instagram, go on Facebook, go on as many social media platforms that we have and then just put the hashtag there, #FreeLeahSharibu.”

As today marks three years since Leah Sharibu was kidnapped her fate has remained unclear as she remains in the captivity of her abductors for refusing to denounce her Christian faith.

Leah Sharibu was one of the 110 girls abducted from Government Girls Science and Technical College, Dapchi, in Yobe state, Nigeria on February 19, 2018. While five of the girls died during the abduction, the remains girls who are Muslims were released in March of 2018, with the help of the Nigerian government. However, the terrorists refused to release Leah Sharibu who happened to be the only Christian among the girls.  The terrorists refused to free her because she refused to renounce her Christian faith.