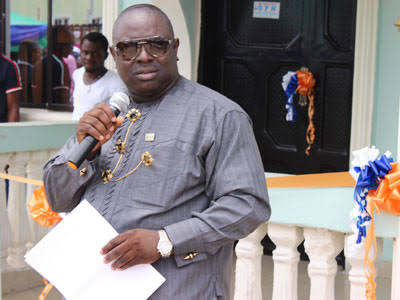 An All Progressives Congress (APC) party stalwart in Bayelsa, Chief Reuben Wilson, has decried what he described as the lack of internal democracy in the state party, saying such is a serious challenge for the party.

He also lamented that he and other members of the APC in Bayelsa state were sidelined from the ongoing party congress in the state.

Wilson, in a statement, thanked his supporters for keeping faith with him and urged the party to follow the due process of electing party delegates and officials as stipulated in the party’s constitution.

“I’m here again to thank all my supporters that moved with me to the All Progressives  Congress (APC).Thanking you everyday wouldn’t still  be enough,owing to what you are going through in our new family ( APC).

Thank you for always standing by me irrespective of the challenges you are currently facing in our party (APC); we are sometimes like total strangers in our party.

I am saying so because we were left out of the on-going  party congresses in the state. People who couldn’t deliver their wards to our great party during previous elections are the ones claiming to be super  party stakeholders and selfishly influencing the process to advance their selfish interests.

At times, I wonder why there is no robust and effective internal democracy in our party, mostly at our state level. Can’t we effectively practise internal democracy in our party in Bayelsa State by ensuring that the due process of  electing party officials and delegates, as enshrined in our party’s constitution and guidelines is strictly followed? Any  political party that is being run without giving consideration to the involvement of majority of the party members but rather allowing the selfish interests of  a few persons dictating  the affairs  of the party,will not survive for a long time or do well in general elections.

The lack of of internal democratic culture in APC, Bayelsa State is a  serious challenge that can negatively affect the fortunes of the party in the state if not urgently addressed.

I and my supporters are here to stay and work for the betterment of this our great party ( APC).Let us put our house together and make sure we deliver the state to our party ( APC) come,2023. I strongly believe that we can win Bayelsa State for our party ( APC) again.

Let me use this medium to address some  trending issues on various social media platforms with respect to the leadership of our party in Bayelsa State. As far as I’m concerned there is no leadership tussle going on in APC, Bayelsa State. In accordance with the relevant provisions of  our constitution,it’s eloquently clear that His Excellency,Chief (Hon)Timipre Sylva is the leader of the party and nobody is contesting that with him. It’s therefore, a great disservice to the party in the state for anyone to use same as a means of currying favour with our leader,His Excellency,Chief (Hon.) Timipre Sylva by trying to create a misunderstanding between him and our 2019 Gubernatorial candidate, Chief David Lyon,who gave us an unprecedented landslide victory, the first time an opposition party was having such victory in the state.

To the best of my knowledge,Chief David Lyon has never contested or argued about the leadership of the party with his boss and leader,Chief Timipre Sylva at anytime. Chief David Lyon is a loyal and committed party man,who is contributing greatly to the success of the party, both at the state and national levels.

It’s therefore, in bad faith and highly sycophantic, the attempt by Yekini Nabena to cause crisis in the party by making flippant and frivolous allegations of ingratitude and insubordination against Chief David Lyon. It’s also highly provocative and  distasteful for Mr Yekini,who is a former national party officer, to celebrate the truncation of David Lyon’s inauguration as Governor of Bayelsa State by the unfortunate Supreme Court judgment, he should therefore, be thoroughly investigated to ascertain his commitment and loyalty to the party.

However, Mr Yekini should seriously concern himself with how he can win his Sagbama LGA for the party in the forthcoming 2023 general elections and not to fan embers of disunity in the party by peddling falsehood. it is evidently clear, from perusing his interview, that he was among those  who worked against the inauguration of Chief David Lyon as Governor.

I hereby most humbly call on the National leadership of the party to call Mr Yekini to order and also investigate him for anti-party activities; and if he is found wanting,he should be sanctioned  accordingly.

I’m also using this medium to call on our leader,His Excellency,Chief (Hon.) Timipre Sylva to ignore the likes of Yekini and once more, demonstrate his quality leadership and peaceful disposition by extending an olive branch to all aggrieved party members in the state, to further strengthen and foster unity in the party.

Finally, I’m using this opportunity to call on all the stakeholders of our great party in Bayelsa State to close ranks and work in unity for the betterment of the party. We should eschew bitterness,envy, greed and sycophancy but rather work in harmony to secure victory for the party in future elections. They say “A house that is divided against itself cannot stand” Let us therefore, be united and focus on the victory ahead.”

ELEVATING THE GIRL CHILD THROUGH TECHNOLOGY

ELEVATING THE GIRL CHILD THROUGH TECHNOLOGY

#BBNaija season 6: How viewers voted Whitemoney to win, other...