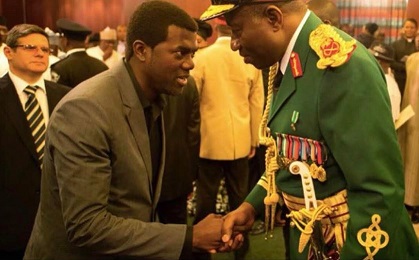 Former President, Goodluck Jonathan has debunked a claim by Omoyele Sowore that he sacked his former aide, Reno Omokri before he left office.

Jonathan made the statement while reacting to a viral video wherein Sowore claimed that he sacked Pastor Omokri before he left office.

A statement by Jonathan on Saturday issued by his spokesperson, Ikechukwu Eze, said that at no time did he sack Omokri.

According to him, “Our attention has been drawn to comments by an online blogger to the effect that former President Goodluck Jonathan sacked Reno Omokri, his erstwhile Special Assistant on New Media, while he was in office.

“For the avoidance of doubt, we wish to state that at no time did former President Jonathan ever sack Mr. Omokri while he was in office. Mr. Omokri was appointed on August 17, 2011, and served meritoriously until May 29, 2015. His record of service can be verified at the office of the Secretary to the Government of the Federation.

“While he is no longer a staff of President Jonathan, Mr. Omokri enjoys the gratitude of many Nigerians including Dr. Goodluck Jonathan for his patriotic services to Nigeria”, the statement said.