NSUKKA—-The Chairman of Wilson Groups Nigeria Limited, producer of Solive Oil and Bestie instant noodles, Chief Williams Agbo, has vowed to intensify his efforts on human capital development as gratitude to God for keeping him in sound health.

Chief Agbo who marked his birthday weekend, said he was thrilled by the turnout of friends and well-wishers who came to celebrate him despite the security situation in the country.

While addressing his audience, comprising friends, well-wishers, workers, relatives, family members and captains of industries, including government functionaries at his residence in GRA, Nsukka Local Government Area of Enugu State, he said “I want to thank you for your show of love and solidarity. I also thank you for making out time to come here and celebrate me despite security challenges in Nigeria today. I cannot pay you back but God will do that for me.
“For celebrating me today, I have been encouraged to do better in assisting people. I will equally try and do better in whatever I am doing such as business and my private life.

“This ceremony really took me unaware. I thank the organizers and my lovely children for the perfect planning. I equally thank my beloved workers and members of my family, and in fact, everybody that contributed in one way or the other for the success of this ceremony. My prayer is that celebration will never cease in our lives,” he said.

Some of the well-wishers who celebrated Chief Agbo passed uncommon verdicts on him, describing him as a philanthropist and jinx breaker.

While talking about the celebrant, a former member of the House of the Representatives, Hon. Charles Ugwu, described Chief Agbo as a very reliable and intelligent man.
He also described him as a creative and thorough person, adding that these sterling qualities robbed off on his success in businesses and other endeavours.

Also, a Manager of Zenith Bank, Samuel Ezema, described the celebrant as a living light in Christendom, adding that he is a leader in the emancipation of the oppressed and a traiblazer in many aspects.

Ezema said that Chief Agbo has impacted positively on so many lives and equally carried out numerous community development projects both at his country home, Eha-Alumona and Nsukka Local Government Area at large.
Similarly, a brother and friend of the celebrant, Barr. Rodrick Ugwu, said that 50% of his successes in politics and public life are attributed to  Chief Agbo.

Barr. Ugwu also said that the celebrant struggled like every other African child faced with harsh realities of life and dearth of social welfare until fate smiled on him.
Barr. Ugwu also disclosed that the celebrant has continued to fulfill his annaul promise of producing five millionaires in his country home Agbamere Eha-Alumona, describing him as an uncommon philanthropist.

The highlight of the event was the cutting of the birthday cake by the celebrant. 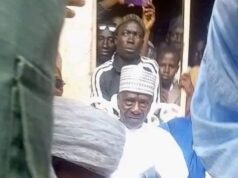