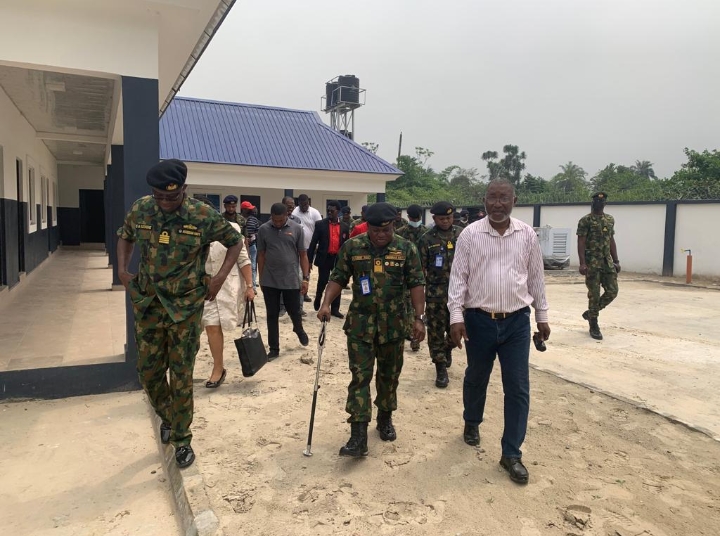 The outgoing Flag Officer Commanding (FOC) Eastern Naval Command Rear Admiral S.K Ibrahim have affirmed that that the Nigeria Navy will continue to provide adequate security to critical national assets (CNA) in the Niger Delta to ensure increased economic development of the area, for the overall benefit of the people and investors.

This was stated at the commissioning of the Navy Mini-Barracks at Ekefe Junction – Ikuru Town, Rivers State. The mini barracks was built and donated to the Nigerian Navy by Green Energy International Limited, the Operator of the Otakikpo marginal field in collaboration with its technical partner, Lekoil Oil and Gas limited.

Rear Admiral S.K Ibrahim who was represented by Commodore SG Olubode Fazaz, the Commander Nigerian Navy Ship Jubilee, stated that corporate organizations, the communities, and security agencies must continue to work together in synergy to protect investments and secure the lives and properties in the Niger Delta. He said the Nigeria Navy under the Chief of Naval Staff Vice Admiral AZ Gambo has improved the security environment of the area.

He commended Green Energy International Limited (GEIL) for the consistent focus on securing the area of operation in Andoni area stating that the mini barracks will provide more accommodation and facilities to the naval staff in performance of their duties.

While calling on other companies in the area to emulate GEIL, The FOC added that “This project would not only contribute positively to the operational effectiveness of the Naval Outpost Ikuru but will also boost the morale of personnel of the Outpost.” Ibrahim said he felt a great sense of fulfilment knowing that another positive impact has been made to the Nigerian Navy.

In his remarks, the Chairman, Green Energy International Ltd (GEIL) Prof Anthony Adegbulugbe said the building of the mini barracks was part of the company’s corporate social responsibility (CSR) to aid the performance of the Nigeria Navy. “The project was a follow up to the building of the Navy facility and barracks in Ikuru town in Andoni community in 2015, and donation of Hilux trucks in 2019, saying the security network of the area would be improved with the additional provision of accommodation” he added.

According to him, “In furtherance of the Company’s mandate to create a localized domestic market based on small scale gas opportunities in Nigeria and Africa, the company with its JV partner are highly investing in gas utilization through LPG and Gas to power Projects which are due for commissioning by second quarter of this year.

According to him, the Gas utilization strategy of the company is aimed at solving the age long environmental challenge of associated gas flaring while also boosting the economic development of the Niger Delta and the nation’s economy. The gas to power project is designed as an embedded power generation strategy for the company’s operations and host communities while the excess would be injected into the national grid. Towards the realization of this objective, the National Electric Regulations Commission has already approved a 40 MW license for GEIL.

He added that in over six years of its operation in the area, the company had enjoyed the cooperation of security agencies adding that with the plans to expand its operations of the company, the Government security forces (GSF) should enhance its security network in the area for the benefit of the critical investments and the economy. He called on the Naval authorities to make effective use of the facility to enhance its performance.

The facility consists of 6 rooms, a security post and an observation tower, a kitchen, a store, and office facilities.  Other facilities include a 20kVA generator and 12 panel and 6 battery solar lighting system.