Bayelsa State Governor, Senator Douye Diri, has given traders in Swali, the largest market within the Yenagoa metropolis, a two-month grace to demolish illegal structures in compliance with the state government’s directive to restore sanity and public health in all markets.

Governor Diri stated this on Saturday shortly after an unscheduled inspection of the market accompanied by top government officials, members of the COVID-19 Taskforce in the state and the market leaders.

In a press release by his Acting Chief Press Secretary, Mr. Daniel Alabrah, the governor said at the expiration of the period, all illegal structures yet to be demolished by the government would give way.

He described as unacceptable the manner illegal structures had been erected and taken over the roads into the market despite the fact that there were over 600 unoccupied stalls built by the government.

His words: “As a result of the ravaging COVID-19 pandemic, we needed to ensure that our markets are clean and should not be death traps from where various diseases could be transmitted. 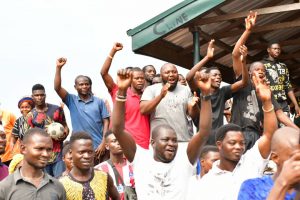 “I appeal to those in the market to comply with the government’s directive. I commend the market chairman and the woman leader for their cooperation with government in ensuring that we bring back sanity and public health in this market.”

Senator Diri warned that traders who occupy illegal structures and shanties in other major markets at Opolo, Kpansia and Tombia in Yenagoa should take a cue from the demolition exercise at the Swali market and take them down on their own to ensure safety of their wares.

He explained that the move became imperative to reduce overcrowding in markets in the event of an outbreak of the virus, which he described as a warfare with an unseen enemy.

“If we have a dirty, shanty market and any person contracts the COVID-19 disease, it would spread to everybody. That is what we are trying to avert.”

Diri assured the traders that more stalls would be built at the Swali market as well as pipe-borne water and other sanitary facilities provided.

He also assured that the request from the Ministry of Trade, Industry and Investment to sandfill the swampy portions within the market would be approved.

Speaking on the order on restriction of inter-state movement, the governor said after his unscheduled visit to the border towns with neighbouring states of Delta and Rivers on Friday, additional measures have been put in place to ensure that the lockdown was complied with.

In their separate remarks, chairman of the Swali Ultra Modern Market, Mr. Jackson Bobra, and the market women leader, Ebiere Ebiotu, commended the governor for the visit and for trying to ensure sanity in the market, saying it was unprecedented.

They thanked him for his exemplary leadership and foresight, adding that within a short period of his assumption of office he had demonstrated the will to govern the people rightly.