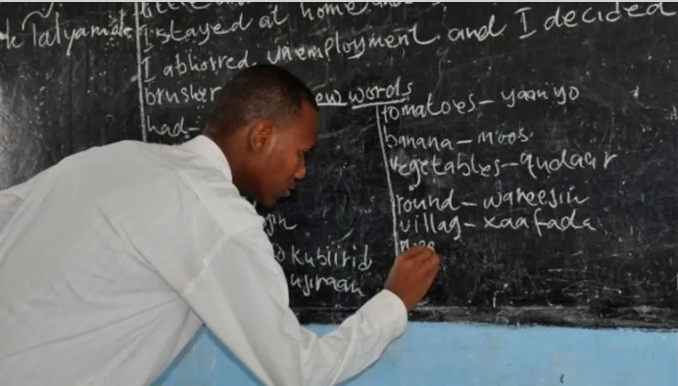 The recent disclosure by the United Nations Children’s Fund (UNICEF) about the poor learning outcomes in Nigeria’s primary education has further brought home the dire nature of the situation in primary schools across the country.

Political leaders had always complained about the poor budgetary allocation to education in federal and state budgets, with the most warning that the situation had to change before it became unsalvageable. This is despite the Federal Governments’ commitment to increase annual education expenditure by 50 percent by 2023 and up to 100 per cent by 2025 made by President Buhari as an outcome of the Global Partnership for Education Summit in July 2021. They had also complained about teachers’ training and outdated teaching methods, some of which the international agency touched upon in assessments of the poor education prospects in Nigeria.

The UNICEF report noted that while some 10 million pupils are out of school in Nigeria, 70 per cent of those in primary schools cannot read or perform basic numeracy tasks at the age of 10. They are not learning anything that would add value to themselves and our society. It warned that in a couple of decades, the current street children and those in school just attending classes and not learning anything won’t add value to the society and economy; putting at risk Nigeria’s plans to become an African powerhouse

Speaking at a two-day media dialogue on Sustainable Development Goals (SDGs), UNICEF Communications Specialist Geoffrey Njoku said, “since 2010, we have pushed to change the narrative of the 10.5 million out-of-school children, but even at that, 70 percent of those in schools are not learning.

Instructively, Njoku didn’t just identify the problem without proffering a solution. “We need to include these 70 per cent in school who are not learning to the 10.5 million out-of-school children so that we will give them proper attention. So, it is high time we focused on learning by revamping the education system through teachers’ training, improving on learning materials and changing the narrative through quality education,” he said.

The Executive Secretary, Universal Basic Education Commission (UBEC), Dr Hamid Bobboyi, agreed with Njoku’s position on solving the problem. Speaking at an event in Abuja, he identified the lack of regular professional training programmes for teachers and the lack of support in delivering outcomes.

For him, there is a “need to invest more in teachers that will teach children the necessary basic level of education, especially in public schools across the country. There is no justification for all the investment in education, if the child in the classroom is not learning.”

However, it is noteworthy that not all state governments neglect primary education. Some are basing their political legacy and the future of their states on averting the crisis facing their populations. Some leaders have identified the gaps and are aware that they lack the requisite technical expertise and technology to arrest the rot. They have consequently sought the assistance of external technical partners to enable quick progress.

One of these educational tech partners increasingly being used by SUBEB’S and State Governments is NewGlobe. This large scale learning solution provider has been delivering rapid change in State’s across Nigeria since 2015. The company’s model provides a turnkey end to end solution leveraging cloud-based technology and advanced educational pedagogy. These drive transformational improvements across the state basic education systems in Nigeria, dramatically improving learning outcomes for all pupils. In Edo, Lagos and most recently Kwara, NewGlobe supports state governments by creating robust technology-enabled education systems.

NewGlobe, previously known best for its Bridge community school programmes, is the technical partner to the Edo State Government on EdoBEST (Edo Basic Education Sector Transformation), designed to revolutionize basic education in public schools and the Lagos State Government on EKOEXCEL (Excellence in Education). Impressively, both transformational interventions have recorded significant and measurable impacts. Governor Godwin Obaseki introduced EdoBEST to improve outcomes across the entire state’s public primary and junior secondary school system in 2018. And since then, there have been marked improvements with other states like Lagos toeing its line by introducing EKOEXCEL.

As of March 2022, EdoBEST was available to 280,000 pupils and had expanded to 380 schools with 2,602 gadgets (teacher tablets and smartphones) handed over to teachers, headteachers, principals, quality assurance officers and learning development officers at a recent graduation ceremony. Over 28,000 Edo children now have access to the EdoBEST pedagogy, which has delivered improved learning experiences in classrooms across the state.

At a recent graduation ceremony of additional teachers, headteachers, principals, quality assurance officers and learning development officers for EdoBEST, Governor Obaseki affirmed his commitment to their continuous training for the program’s growth.

He said, “Teachers remain the most valuable resource in delivering transformational public basic education, and this justifies our resolve to prioritize their recruitment and upskilling.  Our teachers have become the bedrock of change and of this reform. The success seen in Edo is such that the programme has expanded from primary schools into Junior Secondary and Progressive schools; and is supported by the World Bank who are seeing in Edo the use of data to really understand what is happening in classrooms and drive change.

Last year at the Ekiti Investment and Economic Summit, in a panel with the Vice President Pro. Yemi Osinbajo, Governor Babajide Sanwo-Olu said, “I usually acknowledge Governor Obaseki because I copied something that he introduced during his first tenure and which is working three times in Lagos, education. He started EdoBEST, and he brought in NewGlobe, an e-learning solution provider with tablets for basic education. He brought the initiative, and we said we also needed to start with basic education. We have copied that from Edo; it’s working well in Lagos, and we’ll scale it up.”

Fittingly, EKOEXCEL launched in 2019 to provide quality education to pupils and upskill teachers leveraging cutting-edge technology, is delivering on its goals. It has dramatically accelerated student literacy and numeracy performances, with significant differences between student performances in EKOEXCEL schools versus their peers in traditional schools. EKOEXCEL students advanced in numeracy twice as fast as students in traditional schools. At the same time, they progressed three times as quickly as their peers in comparable schools.

So far, over 18,000 headteachers and teachers have been moved from analogue to digital teaching, using tablets and updated curricula. Over 14,000 primary school teachers from 1,017 public primary schools have been captured under the scheme. The education reform programme has also recorded remarkable gains in enhancing the teacher-pupil interaction experience through technology (eLearning) in Lagos State primary schools.

The intervention has also boosted uniformity and strict adherence to the curriculum. Teachers’ tablets are preloaded with lessons and content for effective monitoring for standardization across all of Lagos’ 1,017 public primary schools.

All of these, of course, wouldn’t have been possible if Governor Sanwo-Olu wasn’t committed to the improvement of education, with a tested Nigerian technical partner providing support. Sanwo-Olu has invested massively in education,  dedicating a substantial share of N171.6 billion (or 12.3 per cent) of the total N1.38 trillion 2022 budget to it. Impressively, it is not a wasted investment as verifiable facts and figures continue to affirm. Even global and national bodies and individuals acknowledge the impressive strides of EKOEXCEL, which was recognized at the global 2021 mEducation Alliance Symposium in the US.

The eminent scholar said: “The EKOEXCEL early results point to the kinds of transformational educational experiences that can dramatically change the future economic outcomes for Lagos State. In educational interventions, it is seldom the case that positive results are apparent so early in the program. We now have strong research worldwide that shows that economic growth is directly related to the population’s skills.

If the EKOEXCEL improvements are sustained across all of the primary schools in Lagos, the future labour force of the state will be significantly enhanced, leading to a new economic era.”

If the federal and other state governments borrow a leaf from Edo and  Lagos, where NewGlobe is already providing excellent technical support to improve education by deploying cutting-edge technology, UNICEF’s gloomy forecast about the future of Nigeria’s basic education would be averted.