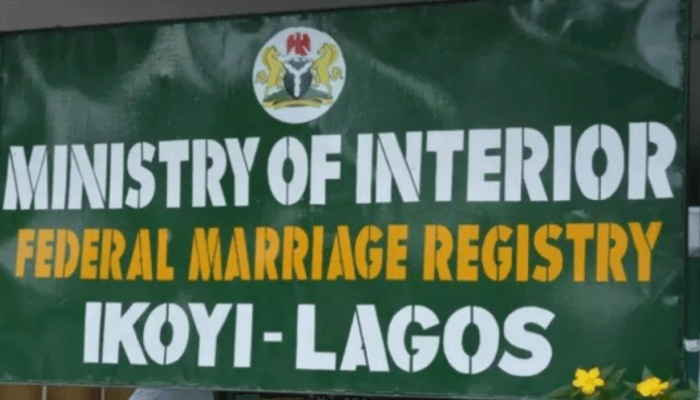 A Federal High court has declared that all marriages solemnized at the Ikoyi Registry in Lagos are invalid and illegal.

The court said the Federal Government which established the Ikoyi Registry and others, lacks constitutional powers to conduct marriages and issue certificates.

Recall that many couples have had their marriages solemnized at the Ikoyi Registry, a choice demand by even foreign countries for those with intentions of travelling abroad.

However, couples who have solemnized their union at the registry have been thrown into confusion following the ruling of the court.

The court, presided over by Justice D. E. Osiagor, on Tuesday, held that only local government marriage registries are empowered to do such by the provisions of the 1999 Constitution (as amended).

According to the judge, the conduct of marriages and issuance of certificates are statutorily the job of the local governments as provided by the law.

He consequently ordered the closure of all federal marriage registries opened by the ministry, including that of Ikoyi Registry with immediate effect.

There has been a legal brawl between some local government areas in Nigeria and the Federal Government over the right to operate marriage registries, conduct marriages, and issue marriage certificates.

The local governments had insisted that their powers to register marriages constitutionally provided had been usurped by the Federal Government through the ministry of interior.

This prompted the Eti-Osa Local Government Area of Lagos State to approach the court, where it sought an order to take over the popular Ikoyi Marriage Registry on the grounds that the Federal Government has no constitutional right to do so.

The suit marked FHC/ LS/CS/816/18, which had the ministry of interior and attorney- general of the federation as defendants, accused the ministry of taking over the power of the local government.

It also prayed the court to declare that the federal government has no business in the conduction of marriages and issuing marriage certificates and therefore order the closure of all marriage registries opened and operated by the federal ministry of Interior or through their agents, including that of the Ikoyi Registry.

At the end, the court granted their prayers, saying only the local governments have the power to conduct marriages in Nigeria.

It was gathered that the latest judgment was not the first to emanate from the court.

Recall that on May 17, 2018, Justice Chuka Austine Obiozor of the same court, while also delivering judgment on Suit No: FHC/L/CS/1760/16, had issued a restraining order against Ikoyi Registry from conducting marriages as it was unconstitutional for the Federal Government to perform the duties of the state and local governments.

He said the marriage registries in the local government of Lagos State were the authentic and legally-binding government divisions established to carry out such functions.