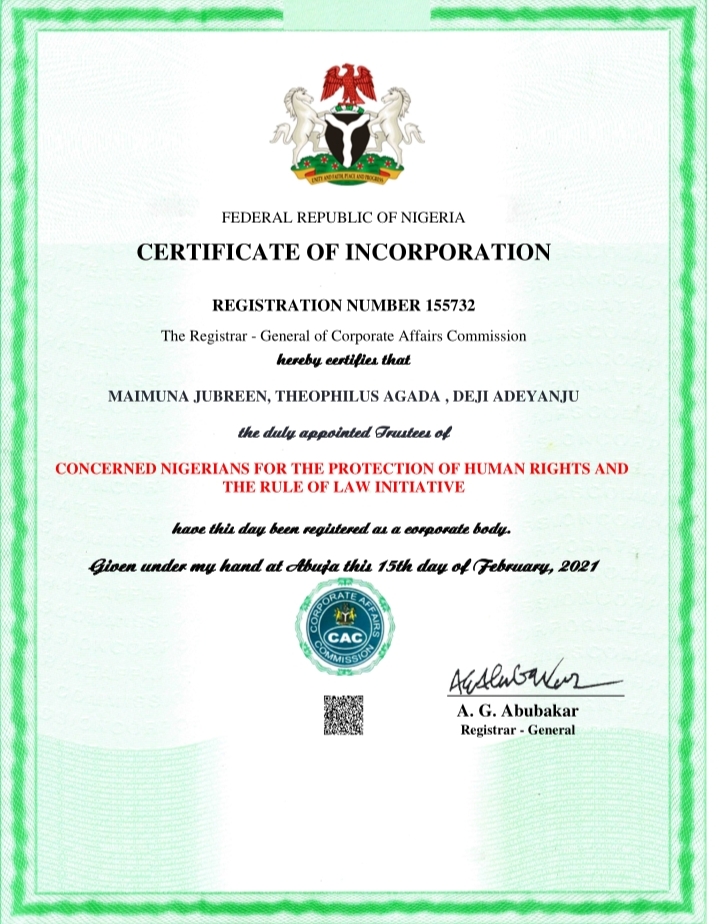 The Corporate Affairs Commission, CAC, has finally registered human rights and good governance group, Concerned Nigerians, “for the Protection of Human Rights and the Rule of Law Initiative.”

The registration is coming after five years of continuous request for it to be registered.

While announcing the registration in a statement, the Convener, Deji Adeyanju, said although the group met all necessary conditions to be registered, it was however deprived of the registration until after five years.

He said the group would remain steadfast in fighting for human rights and standing against bad governance.

“We wish to bring to the attention of members of the civil societies within and outside Nigeria, friends, donors, partners all over the world and the general public, that Concerned Nigerians for the Protection of Human Rights and the Rule of Law Initiative (also known as “Concerned Nigerians”) has been registered by the Federal Government of Nigeria, after five grueling years of consistent refusal by the regulatory agency, acting on the prompting of security agencies and state agents who have made it a point of duty to repress human rights in Nigeria.

“Concerned Nigerians is a human right oriented platform that has remained consistent in fighting for human rights in Nigeria, promoting electoral reforms, as well as advancing the rule of law.

“Over the years, we have taken the lead role in resisting government policies that are inimical to the citizens’ human rights. For example, when state agents unjustly arrested and massacred hundreds of Nigerian Shiites, we stood should to shoulder with the organization and resisted any attempt by the government to discriminate against the Shiites on the basis of their religious beliefs.

“We have equally monitored several elections in Nigeria, with a view to promoting electoral reforms. Just recently, we joined hands with other civil society organisations to protest against the endemic culture of abuse situate in the now disbanded Federal Special Anti Robbery (FSARS).

“However, these interventions have not been without cost. One of such cost is the deliberate refusal, by state agents, to register the organization for five years, despite the fact that we had met all the conditions for the registration. This goes further to show that repressive governments will not easily give in to human rights. They will employ all manner of anti democratic forces to ensure that citizens’ human rights are subject to the wimps and caprices of the government in power.

Adeyanju also said that, “Notwithstanding the foregoing, we must not cower. We use this opportunity to encourage civil societies all over the world not to relent in their fight for the promotion of human rights. Evil may persist for a while but good will eventually triumph!”