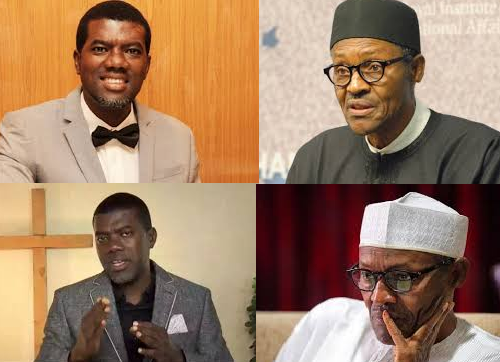 The number one bestselling author and former aide to ex-president Goodluck Jonathan, Pastor Reno Omokri, said that President Muhammadu Buhari’s statement that crude oil sold for $100 from 1999 to 2014 when past administrations of former Presidents Goodluck Jonathan, Olusegun Obasanjo and Umaru Musa Yar’Adua held sway is inaccurate.

Pastor Omokri, in a statement citing World Bank records, argued that the average crude oil sold withing the time cited by the president is not $100 but $61.7 per barrel.

The president had said that past administrations failed to provide infrastructure for the country despite selling crude oil at $100 per barrel.

But Omokri, in the statement on Friday, claimed that the summations of the president was inacurrate.

“President Muhammadu Buhari, in a bid to defend his administration, has again spread misinformation regarding the records of crude oil prices under past administrations.

It should be noted that former Presidents Olusegun Obasanjo, late Umaru Musa Yar’Adua and Goodluck Jonathan, who are members of the opposition Peoples Democratic Party (PDP) ruled between the said period.

“Look at the state of infrastructure. Look at our road. Look at rail. Look at power. And tell me which country develops without infrastructure,” he said, blaming the PDP led government for the woes of the country,” Buhari said.

Meanwhile, checks have revealed that this was not the first time the President reeled out such figures. On October 1, 2016, the Nation’s Independence Day, President Buhari, said that oil prices were “an average of 100 USD per barrel over the last decade.”

He did in 2018 while campaigning for a second term in office, which he eventually got.

He also restated the same while receiving a delegation of the Buhari Support Organisation (BSO) at the Presidential Villa in the same year. “When we came, it collapsed to $37-38 and it was oscillating between $40 and $54 sometimes”, Buhari said.

Data from the Organization of Petroleum Exporting Countries (OPEC) culled from Statista, one of the world’s leading providers of market and consumer data, showed the prices of bent crude between 1999 to 2014.

Further analysis showed that between the period under review, it sold for as less as $20 and as much as $109 per barrel.

For instance, by POLITICS NIGERIA’s calculation, the oil price averaged between 1999 and 2014 is $61.7 per barrel.

I also understand that Buhari’s spokespersons, Garba Shehu and Femi Adesina, who were reached for clarifications on the president’s figures did not respond to the enquiry sent via texts.

VERDICT: Since records and POLITICS NIGERIA’s analysis showed that crude oil sold for an average of $61.7 per barrel between 1999 to 2014, the President’s claim of $100 per barrel is inacurrate.”