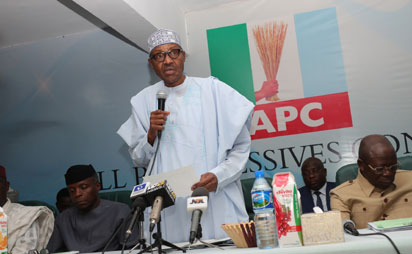 President  Muhammadu Buhari has admitted that the All Progressives Congress, APC, led government which he leads has not fulfilled the promises they made to Nigerians since assuming power in 2015. President Buhari however said that his government has made some progress in trying to fulfil the promises.

Recall that during campaigns towards the 2015 presidential election that eventually saw Buhari emerging as president, the now president and his APC party had promised to terminate insecurity in the country, make one Dollar exchange for one Naira, end corruption and also boost the nation’s economy to become competitive with those of global nations.

Global Transparency Index, for instance, rated Fulani herdsmen in Nigeria who have killed thousands of Nigerians and have continued to kill, rape women, destroy farm lands and crops, including peoples’ properties and have equally continued to kidnap Nigerians and demand huge ransoms, as the third most dangerous terrorist group in the world, with Boko Haram (also a deadly terrorist group in Nigeria) taking second only to ISIS.

The world economic index places average Nigerian as living below one dollar.

Also, while there have been killings across the country on daily basis, communal clashes, kidnappings, armed robbery, police brutality, cultism, frequent clashes between the security forces and some citizens in some states like the Shiites, IPOB, Amotekun, bandits, and many others have all in teased exponentially compared to what was obtainable before 2015.

Also, corruption rose to such an alarming level that those in the executive, legislature, judiciary, educations sector, private sectors and virtually every sector are all interwoven in neck-deep corruption.

Consequently, Buhari whose government has always denied the deteriorating nature of almost everything since he came to power and whose government had always denied the increasing insecurity in the country, finally accepted his administration’s failure in fulfilling its promises to Nigerians. Buhari accepted the defeat during a meeting with the newly appointed service chiefs on Tuesday. According to him, it has not been easy for his government since 2015.

According to a statement by Adesina, the President urged the service chiefs to be patriotic, saying the country was in an emergency.

The statement quoted the President as telling the service chiefs that “We’re in a state of emergency. Be patriotic, serve the country well, as your loyalty is to the country.

“We promised to secure the country, revive the economy, and fight corruption. None has been easy, but we have certainly made progress.”