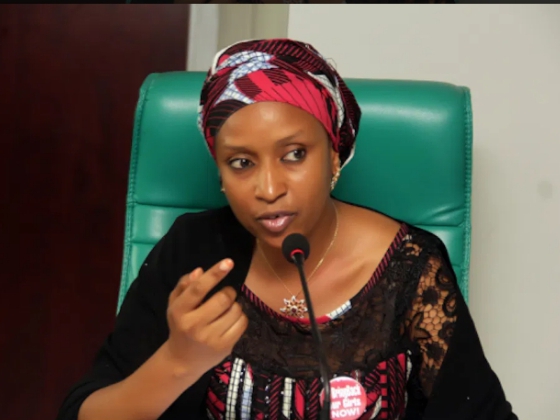 President Muhammadu Buhari has approved the suspension of Hadiza Bala Usman, the Managing Director of the Nigerian Ports Authority, senior officials familiar with the development said.

The suspension was approved on Tuesday by Buhari but, as of Thursday evening, remained undisclosed amid high-level efforts to ensure the decision is reversed.

NPA’s Director of Finance and Administration, Mohammed Bello-Koko, was named to lead the organisation in acting capacity.

“The suspension has been approved by Mr President but it could be reversed in the days ahead because top personalities are making efforts to ensure she remains in office and the suspension is reversed,” one official, with inside knowledge of the matter, said on Thursday asking not to be named for lack of authority to speak to the press.

The official said the suspension was to allow a probe of allegations of impropriety against Ms Usman to take place unhindered. The probe is at the instance of the supervising transport ministry, headed by Rotimi Amaechi.

The official did not disclose exact details of the allegations against Ms Usman.

Ms Usman was reappointed to continue heading the NPA in Janaury by Mr Buhari several months before the end of her first tenure.

Among individuals, said to be working to save Ms Usman are the Chief of Staff to the President, Ibrahim Gambari, a former head of state and a former defence minister, whose business interests have reportedly benefited Ms Usman’s NPA’s policies.

“Yes, the suspension has been approved,” another official confirmed, also asking not to be named and refusing to give details.

The ministry of transport did not officially confirm the development but an official there said a statement would be “issued in the coming moments.”

If an official statement is made, Ms Usman may have lost the battle to reverse the suspension.

Ms Usman did not answer calls placed to her phone to comment for this report. She also did not reply a message.

Confirming this development on his official Twitter handle, the senior special assistant to the President on media and publicity, Mr. Garba shehi said:

“President Muhammadu Buhari has approved the recommendation of the Ministry of Transportation under Rt. Hon. Rotimi Amaechi for the setting up of an Administrative Panel of Inquiry to investigate the Management of the Nigerian Ports Authority, NPA….”