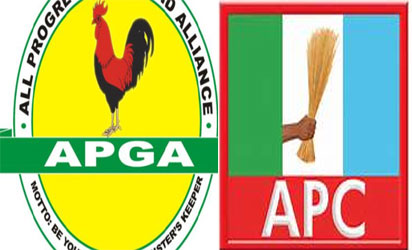 The National Executive Committee of the All Progressives Grand Alliance, APGA has sacked the two factional Chairmen of the Party and appointed a new Ag. National Chairman, Chief Jude Okeke.

Briefing newsmen after rising from its 114th NEC meeting in the Abuja, the National Publicity Secretary of the Party said six other members of the Party were also sacked including Chinedu Obidigwe, Barr. Hamman Buba Ghide, Barr. Sylvester Ezeokenwa, Adamu Danjuma Musa, Chief Uchenna Okogbuo, Barr. Ifeanyi Mbaeri who are suspended indefinitely from the party for anti-party activities, gross misconduct and conduct capable of bringing the party’s image to disrepute among others.

Furthermore, the party NEC also resolved to nullify the disqualification of 5 aspirants for the Governorship election in Anambra who were disqualified by the Victor Oye led faction declaring that no person had been dsqualified and that any purported disqualification was done without the authority of the Party. The disqualified aspirants include Nze Sullivan Akachukwu Nwankpo, Hon. Okafor Nonso Smart, Hon Chukwuma Michael Umeoji, Ozoka Odera Ifeanyi and Umeoduagu Nnamdi Dike

The Party also extended the sale of its Governorship forms to the 25th of June, 2021, rescheduled the primary election for July 1, 2021  while cancelling the earlier fixed dates of 23rd June and 25th June while warning aspirants who had picked the forms to keep away from those dates. The Party also resolved to apologize to its members in Imo State who were defrauded by the Party and denied opportunity to participate in the primary election of the Party.

In his acceptance speech, Chief Jude Okeke who was sworn in at the event said it seemed over the years; APGA was comfortable with having only Anambra as our only State but that the fortunes of the party would grow under his leadership.

It would be recalled that APGA had been enmeshed in leadership tussle ahead of the Anambra Guber polls.