Speaker of Abia State House of Assembly, Rt Hon Chinedum Enyinnaya Orji MNSE, has hailed the border closure policy of the federal government, saying that the policy has enhanced the promotion and consumption of locally manufactured goods. 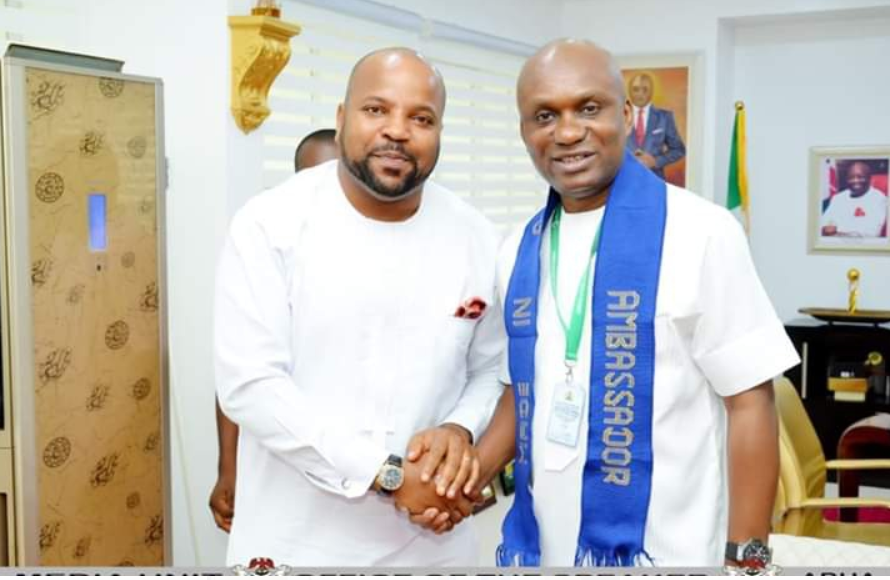 The Speaker stated this when the Director General of Abia State Marketing and Quality Management Agency (AMQMA), Barr Sam Hart, led the management team of the Agency on a courtesy visit to the Speaker in his office at the Abia State House of Assembly Complex in Umuahia the state capital earlier today.

The Speaker who commended the agency for the good work it has been doing within the short period the Sam Hart-led management team came on board said “the promotion of Made in Abia (or Made in Aba as it is popularly called) products remains one of the cardinal requirements for the entrepreneurial development of our people and the economic prosperity of our State. Your job of promoting these products as an agency of government therefore becomes critical in our collective journey towards Abia’s greatness”.

The Speaker further noted that AMQMA’s giant strides so far might not be unconnected to the fact that its management team is mostly made up of youths.

The Speaker said the border closure by the federal government has helped Abia entrepreneurs and farmers to expand their markets as Nigerians now appreciate and patronise locally produced goods more than it was before. He therefore called on Nigerians to support the policy.

“Nobody should buy any foreign rice. Gone are the days when people used it as a status symbol. I have since banned the eating of foreign rice in my house. Anyone offering you foreign rice at this time is not doing you well. Patronize locally produced goods. Patronize Abia rice”, he admonished.

Earlier, the Director General of the Abia State Marketing and Quality Management Agency, Barr Sam Hart, told his host that he was there with his team to intimate him about the activities of the agency and the responsibilities he has been saddled with when the Governor, Dr Okezie Ikpeazu, appointed him, saying “Mr Speaker, we are doing our best to meet up with the responsibility, and so far, it has been both exciting and rewarding. Our agency is also saddled with the responsibility of projecting whatever is being produced in Abia to the global market. We therefore most graciously seek your kind intervention in the completion of the legislative processes setting up the agency”.

On the DG”s request, the Speaker advised the agency to liaise with the Special Adviser to the Governor on Legislative Matters so that the amendment could be brought to the House of Assembly and acted upon immediately.

Barr Sam Hart and his management team thereafter went ahead to proclaim and decorate the Speaker, Rt Hon Chinedum Enyinnaya Orji, as Ambassador of Made in Aba products

Àmọ̀tẹ́kùn As a Game Changer For 2023 – Reno Omokri

Video: If Biafra had accepted Decree No. 8, Nigeria would’ve disintegrated since – Asiodu

Àmọ̀tẹ́kùn As a Game Changer For 2023 – Reno Omokri