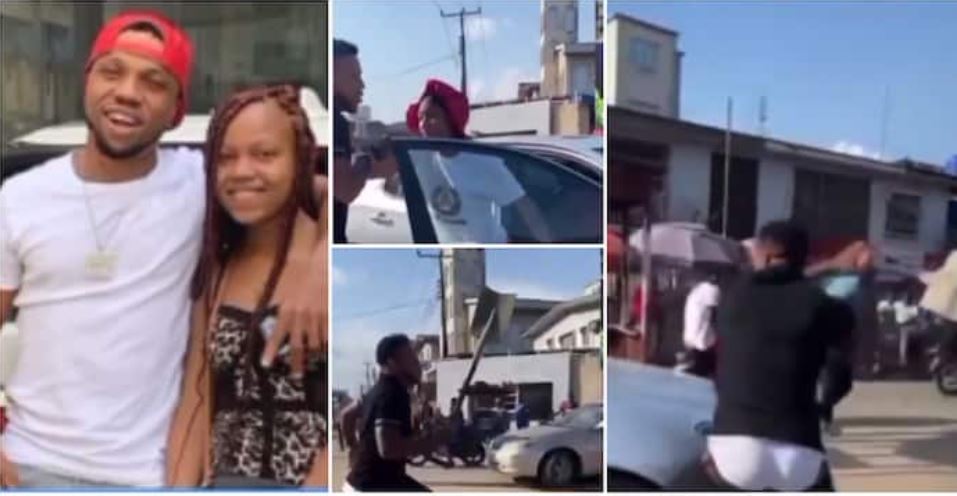 Popular Nigerian actor, Charles Okocha, was recently spotted displaying on the street after seeing his teenage daughter in his friend’s car.

In the trending video, the actor was seen dragging his young daughter from the car’s front seat.

Charles Okocha had already hit the car’s windscreen so many times with the spade before onlookers intervened and tried to stop him.

Not long after the video trended online, numerous internet users shared their take on the actor’s display.

Some of their comments below: Jude_gram__: “The guy went too far, he shouldn’t have taken her out without his knowledge!!”

Innocentchi2100: “Where is she now we must chop am the father da chop people own.”

Ter_sey: “I said it that this girl bf go see something.”

Iam_dilla_ak: “Na only front windscreen he scatter, he for scatter the rest. omon na acting.”

Charles doesn’t joke with his daughter, Mercy, and this explains the surprise he recently pulled on her after being away from home for several weeks.

ALSO READ: I am not going to do music forever- Naeto C

The Nollywood star and some friends showed up at his daughter’s school unannounced and left the young lady feeling emotional.

Charles shared a video on his Instagram page that captured the moment Mercy ran out of the school gate into his warm embrace.

The doting dad did not hold back from lifting his daughter in the air and plastering her with kisses.

Charles also told his daughter how much he loves her and missed her while he was away.