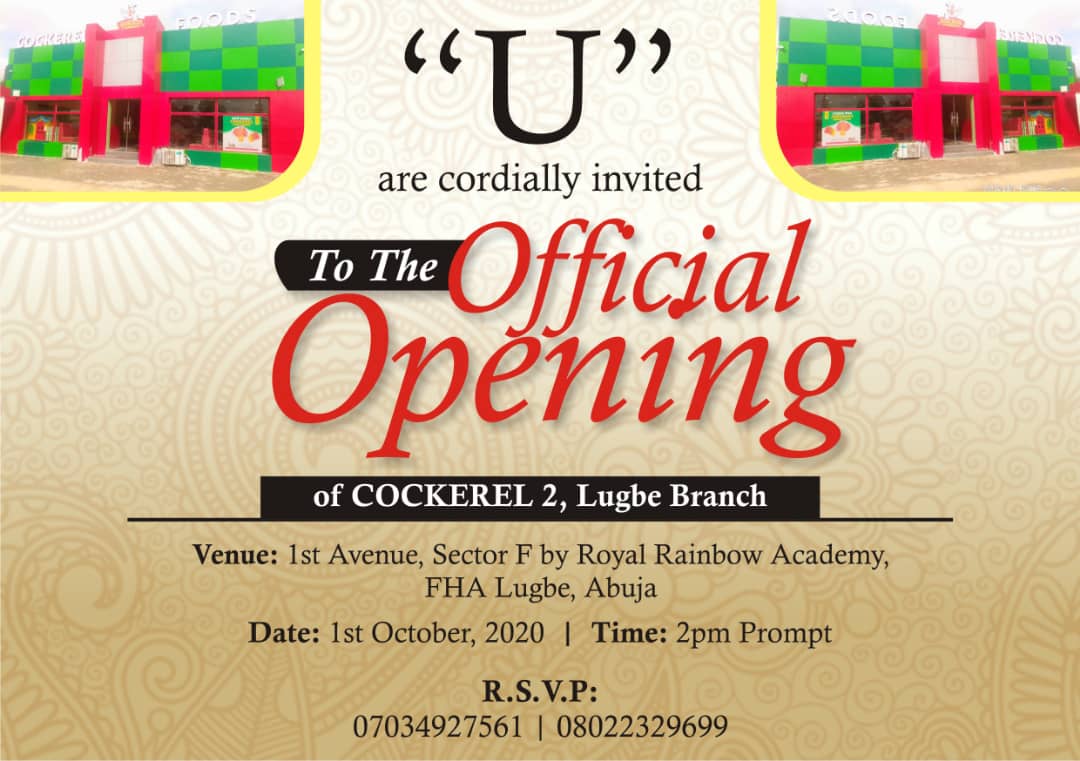 One of Abuja’s foremost eateries, Cockerel Fast Foods,will be hosting an Independence Day Party for children of the IDP camp in Durumi Abuja on Thursday, 1st October 2020.

This party is in commemoration of Nigeria’s 60th anniversary which theme is ‘Together’ as well as to announce the opening of their second branch in Lugbe on the 1st of October 2020.

The CEO of the company, Mr Ono.K.Akpe stated that, ‘The party is a way of celebrating with the less privileged members of the society, especially at a time like this when Nigeria marks her 60th anniversary. We also want to use this party to commemorate the opening of our second outlet in Lugbe Abuja,

Akpe stated that the decision to host this party is further propelled by the current economic situation facing the country and the world at large which might make it difficult for children of the IDP’s to experience the joy of independence day.

The CEO added that at a time when Nigerians will be celebrating the anniversary, there are others who won’t be able to celebrate, hence this initiative. He however added that the party would be held strictly within the present COVID -19 protocols.

Mr Ono Akpe also called on the government, companies, corporate bodies and well meaning Nigerians to show their love to the IDP’s, orphans and other less privileged Nigerians, adding that ‘by doing so we can foster love, unity and togetherness.’ He concluded by stating that Cockerel Fast Foods will continue to reach out to the less privileged members of the society as part of its corporate social responsibility obligations in the F.C.T, and other upcoming locations planned for Bayelsa, Delta, Cross River states and other areas of it’s operations.

Recall that during the height of the COVID-19 lockdown, Cockerel Fast Foods premier branch located at Treasure island Zoological Garden in Area 1, mobilised resources and fed over 200 IDP Children in the IDP camp for over a month.