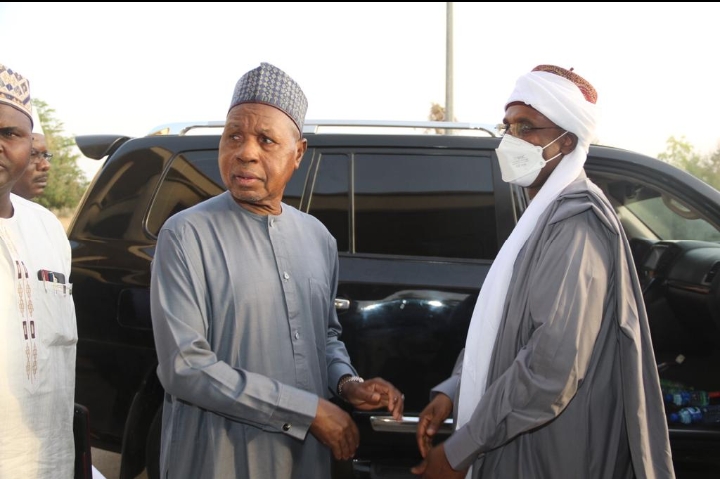 Presidential hopeful and Minister of Transportation, Rt Hon. Chibuike Rotimi Amaechi has said that if elected as the APC Presidential flag bearer and eventually wins in the general elections he would bring his wealth of experience to bear in securing, and advancing the nation’s economy.

Amaechi explained that having been in public office for over two decades, he possessed the requisite knowledge and technical know-how to tackle insecurity, and provide better governance for Nigerians.

Amaechi, while also recounting his achievements as Rivers Governor, said he was able to tackle insecurity, champion development and stabilize the Rivers economy, assuring that such feat would be replicated if he is elected for the country’s topmost job.

He said, “Your Excellency, you are the first Governor I’m visiting after declaring to run for the President of Nigeria in 2023, I will visit others as I progress with my consultations. I have visited three to four Emirates, two in the area you superintend over, and two in Kano. I have come to also brief you on how far we’ve gone with the railway assignment given to us by Mr. President. And the third reason is to tell you that I am interested to run for the office of the President of Nigeria.

“I think I’m qualified, and I happen to be the only candidate in the race who governed a State where there was militancy, so I have experience of how to manage militancy. Between six months and one year of occupying the office of Governor of the State, the militancy reduced tremendously. Schools were opened, market women were able to go back to the markets, kidnapping reduced drastically and business returned. Foreign companies came back, Shell reopened, in fact by the time I was leaving, Total was trying to transfer their headquarters to Port Harcourt. Unfortunately when I left, they couldn’t manage it, so Total moved back to Abuja. But LNG returned their headquarters to Port Harcourt during my tenure as governor, Shell relocated their headquarters to Port Harcourt. So we have experience, for somebody who has been in office for eight years as Governor, eight years as Speaker, seven years as Minister, I chaired the Governor’s forum, I chaired the Speakers forum, I also was the DG of the campaign of President Buhari twice. I would bring that experience to bear if given the opportunity.

“For me, the Governors are critical in getting that opportunity and there’s need to talk to your colleagues to assist us to achieve that objective,” Amaechi said.

Responding, Governor Masari said he had no doubt about the Minister’s leadership qualities. He also used the occasion to wish him well in his political aspiration.

“To me, you are not a person that needs any introduction. We have come a long way. I have no doubt in your character and in you ability and in you inclusiveness. We have discussed this privately, now you have come to formally declare your intention to contest for the office of the President of your country, which I feel you are qualified, and I hope you will play politics like a modern politician, because the way our politics is been played for quite some time, there is need for change of attitude, change of approach, change of style, so that we should treat the current situation of today with today’s solutions, not today’s problem with yesterday’s solutions.

“Like you know, I wish you well. You were there for me when I needed support and I appreciate and recognize that. You have a good chance. The experience, you have it, the service years, you have it and the rest we leave it to God because he is the ultimate decider. I wish you well,” the Governor said.

As part of his political consultations in the North West, the Minister also visited the Emirs of Daura, Katsina, Bichi and Kano. Those in his entourage include Senators Ali Ndume, Sadiq Yar’Adua and Ayogu Eze. Others are Chief David Lyon and former APC Chairmanship Contestant, Saliu Mustapha.