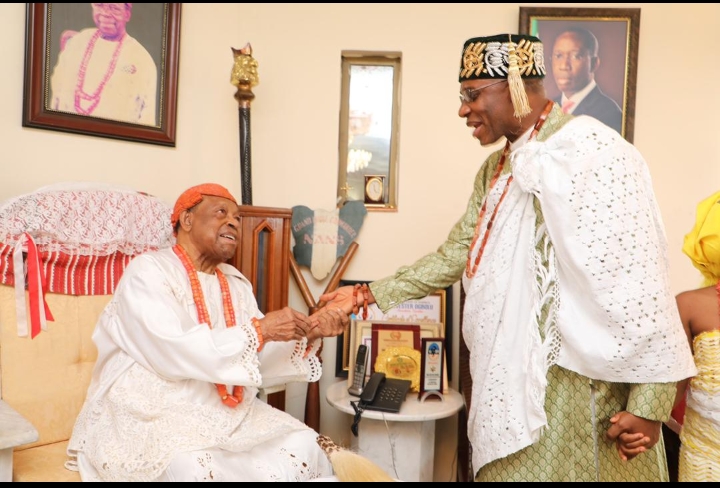 Presidential Aspirant, Rt Hon. Chibuike Rotimi Amaechi has taken his consultations for the 2023 Presidential primary to Delta State where the All Progressives Congress (APC) in the State declared total support for his candidacy.

Amaechi who met with the leadership of the APC and delegates in Asaba, Friday, urged delegates to vote for him for his competence and not just because he is from the South South. He also paid a visit to the Asagba of Asaba, Obi Chike Edozien.

Speaking to the delegates, Amaechi said, “There are two essential elements that takes people to power, governance and infrastructure. If you combine this two, you create an economy. I am ready for you to run a referendum on my past activities. Governor for eight years, speaker for eight years, and Minister for seven years. Let anybody who says Amaechi should not be President ask ‘what is his capacity?’ as Minister for Transport, I was on this track, Warri-Itakpe rail line. When we came, there were bushes and trees on the track. And knowing that South South is part of Nigeria, I got the President to approve money, it wasn’t a loan, it was funded from the budget. Today, you can travel from Itakpe to Warri, Warri to Itakpe and then to Abuja.

“The point I’m making is, it was there 32 years before we came, if we did not do it, it would have continued to be like the forest that we met. I’m working extremely hard to make sure Lagos-Calabar rail line starts. We’ve awarded the contract, we are looking for the loan. What affects you is that from Benin, there’s a spur to Onitsha, and there’s a new bridge into Onitsha. If I don’t become the President of Nigeria, nobody will do that project, because it is $11 billion and that is for now one of the biggest projects in the world. So this is not the time to play with your votes. It is our future. The day we do Lagos-Calabar which goes up to Onitsha, that is the day you’ll see some developments coming back here. Just give us another six months, you’ll see the impact of the second Niger bridge.”

“As Minister, I don’t think the Nigerian people will say I’m an absent Minister. I’m a Minister that is present almost all the time, because I know what it is to deliver to the people. I have that capacity to deliver. Vote for me because I have the capacity to turn Nigeria around, and when I get there, please hold me accountable.”

Amaechi recalled how, when he was Governor of Rivers State, he would hold town hall meetings in different local government areas to give account of the monies received by the state government and projects they’re being spent on, including payment to contractors to ensure they are equally held accountable. He assured that with him as President, things will change for good.

“I don’t have the solution to every problem in Nigeria, but things will certainly come to change. If you read my declaration, you will see ‘hope is in the corner,’ all you need do is to push it a bit and you’ll see the difference. The electability of a candidate is necessary for APC to win. Please give me your votes at the primaries,” he said.

Responding to accolades that he helped resolve the differences in the APC in Delta State, Amaechi said, “It was necessary if APC will win the South, for the party to be united. For Delta, all it took was call my friends and say, look, three persons cannot be governor, so let us allow one person go and everybody will have peace. I think that was the deal breaker.”

Earlier, the Chairman, Delta State APC, Engr Omeni Sobotie thanked Amaechi for being instrumental to the resolution of all issues within the APC in Delta State and bringing them back together as one, adding that the party is going into the primaries as a united front.

“I want to announce to everybody that APC Delta, in the last 48 hours something happened. For the first time since 2015, we are going to go into the battle of 2023 as a united front. We no longer have any differences in APC. I want to acknowledge the man with whom God has done this for us, Rt Hon. Rotimi Amaechi. God has used him as an instrument to effect total reconciliation in the party. I also want to tell you that the Deputy President of the Senate (Omo-Agege) is so excited that you’ve been able to achieve this.

“In our midst is a man who has the courage of a lion. When you have courage, you are in the majority. But for your courage sir, the South South would have been put to shame. We stand with you, we stand behind you. We have 88 statutory delegates here, by the time we add the adhoc delegates it will be 161. We want to assure you that all the votes will be cast in your favour,” The Chairman said.