STAKEHOLDERS in the nation’s capital market have forecasted a mixed grill at the end of corporate earnings releases for the full year for 2017 even as preliminary results submitted to the Nigerian Stock Exchange, NSE showed significant improvement, beating analysts and operators’ expectations. The preliminary results released by 16 companies quoted on the NSE showed that their gross earnings went up by 30.4 percent to N2.477 trillion in 2017 from N1.899 trillion in 2016, a reflection of the trend in economic recovery. 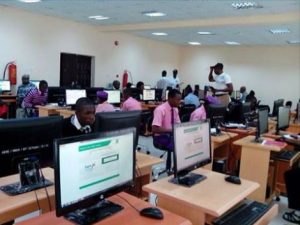 In the same vein, the 16 companies’ Profit Before Tax, PBT, rose by 46.1 percent to N594.9 billion in 2017 from N407.1 billion in 2016. Meanwhile, the stakeholders have opined that the Central Bank of Nigeria, CBN’s recent policy on management of Non Performing Loans, NPLs, may moderate earning of some banks. They further said that though the results released so far are in line with expectations, they have not enjoyed commensurate reaction from the investing public.

The apex bank had stated that banks that do not meet the minimum capital adequacy ratio shall not be allowed to pay dividend.

Also banks that have a Composite Risk Rating (CRR) of “High” or a NPL ratio of above 10 percent shall not be allowed to pay dividend and banks that meet the minimum capital adequacy ratio but have a CRR of “Above Average” or an NPL ratio of more than five percent but less than 10 percent shall have dividend payout ratio of not more than 30 percent. Because the banking sector has largely dominated the stock market investment landscape, the stakeholders hold the opinion that whatever happens to the sector will have significant impact on the overall market positions. Analysis of companies’ results A review of the 16 companies’ performance showed that the three banks that have turned in their results accounted for a whopping 55 percent of the total turnover recorded in 2017.

But one can conjecture that many companies were struggling to survive at the peak of Foreign Exchange, forex, crisis in larger part of last year until the Central Bank of Nigeria, CBN, intervened. “The intervention brought about relative stability of the forex market. It is not unlikely that results of some companies may reflect the initial impact of forex crisis on their operations. On dividend payment, all the apex bank has done is to set criteria for companies that intend to pay dividend, especially, the minimum Cash Reserved Ratio, CRR to avert abuse of dividend payment.

“We expect an improved performance from Tier-1 and Tier -2 banks in 2018 because the operating environment is more conducive in terms of monetary policies. However, the apex bank’s policy on management of Non-Performing Loans, NPLs, may moderate earnings of some banks. “As for manufacturers’ access to forex, the CBN has created the Investor & Export, I & E forex Window to lessen the burden.

This is expected to have positive impact on the bottom line of the companies in the real sector.” Mr. David Adonri, Executive Vice Chairman, Highcap Securities Limited, said: “As a result of recovery of the economy and impressive third quarter, Q3’17 results earlier released by companies, full year performance will be good. “At full year, most of the banks would have reduced their non performing assets to the level that should enable them pay good dividends.

We expect companies to repeat same or even perform better in 2018. However, we are not expecting banks to repeat same because already the treasury bills have started falling and by the time Monetary Policy Committee, MPC, members are cleared by Senate; they may hold their meeting this month and we expect them to bring the Monetary Policy Rate, MPR down from 14 percent and same with other monetary policy.” Chinenye Anyanwu, Managing Director/CEO, Dependable Securities, said: “The results are very fair.

Am not sure that any of the companies has gone below expectation, but the only difference is that we have not seen commensurate reaction from investors. The share prices of banks like Zenith Bank have no reason to be dropping after such a good result. “So, the investing public to me is not responding appropriately.

There are other micro and macro economic realities that could be responsible for their reaction. “Investors’ reaction towards the stocks is not a judgment on the individual stocks, but the trend of the market.

When the trend is down, it is down. We are gearing up towards election period in Nigeria and the word is caution. We have politicians holding the budget. All those factors make external investors to be apprehensive and want to ask whether they are in the right place. So, it is mostly uncertainty on the part of investors” Also speaking, Mr. Patrick Ezeagu, Managing Director/CEO, Solid Rock Securities, stated: “The corporate earnings seen so far are impressive judging from the economic realities on ground.

“Ordinarily, one would say that the results are wonderful judging from the difficult operating environment and the fact that the country is just emerging from recession. They were able to cover their overhead and still declared some dividend. “The reality is that for some investors, the dividends declared are not as good as expected”. Alhaji Gbadebo Olatokunbo, shareholder activist and co- founding father of Nigerian Shareholders Solidarity Association, NSSA, said: “Really, it was a bomb-shell to the expectations of shareholders on returns on investment following the CBN announcement. A sadist-policy to returns on investments in the banking industry, but CBN has a job to do and it must be done effectively.

“Therefore we shareholders will have to hold the managements/directors of our banks liable if they are unable to pay dividend. I am of the opinion that any bank that failed the test of CBN on dividend-payment shouldn’t pay emoluments to their directors and the management. They should lose their bonuses/welfares and be responsible for the payment of any sanction from the CBN forthwith.

“Sincerely, since, the economy is out of recession, the expectations were very high because so many opportunities were there to tap into and everything been equal, the sky might be the limit. Dividends are the results of every good investment, therefore it’s expected and in a better way. “Some of the 2017 results we are seeing now are good considering the economy at the beginning of last year. It is a welcome development and speaks volumes on our economy on both directions (positive or negative).

We shall have to wait to see the effect of the current CBN’s pronouncement concerning the banks, while I wish that Zenith Bank maintains the tempo.” Mr. Moses Igbrude, spokesperson, Independent Shareholders Association of Nigeria, ISAN said: “Companies’ dividends payment is as good as their performance. The question then is, what is their performance in the current state of the economy.

Some companies like Zenith Bank, GTBank with some advantages over others should pay good dividend, while others should pay according to their earnings without adverse effects on companies operations. To me, the most important thing is the sustainability and continuous existence of the companies. “If they don’t pay dividend this year, what are they doing today to pay good dividends in the nearest future?

My problem with the CBN directive on NPL is why should the CBN wait until when shareholders are hoping and expecting banks results? “Why not six months ago? The stocks market was going up, suddenly when the CBN released its directive, this started affecting the market.”